As you walk towards the home you are greeted by a large open garden and deck area to enjoy your morning coffee and listen to the soothing sounds of the beach or the occasional bus that picks up its clients.
A shower outside in the back of the home will allow family and guests to take a quick shower before entering the home.

On the main floor you have two spacious bedrooms and a bathroom, and a large living area with an open kitchen.
On the second floor you have the owners’ quarters that also has a seating area, kitchen, dining area, bathroom and staircase to mirador.

On the second floor you have access to the third floor mirador – view out where you can enjoy the sun rises or sunsets.
The property has spacious open living areas, and green garden in front that provides some front street privacy which are some of the perks that you can enjoy in this house. Entering the house from the street, there is parking for 1 car.
Poneloya and Las Peñitas are the the quickest developing coastal communities in Northern Nicaragua.

With its prime location just 20 minutes from the Colonial City of Leon and one and half hour from Managua Airport.
Poneloya and Las Peñitas are fishermen beaches, located west of Leon. Las Peñitas is a beach of artisanal fishermen, very close to Poneloya. It has an estuary that fills and empties according to the tide, and that connects the mainland with the island of Juan Venado; a wildlife sanctuary declared a Natural Reserve due to its great ecological wealth.

The Juan Venado Island, or Isla Juan Venado as it is called in Spanish, is located just off the coast in front of the town Las Peñitas. The island south end is in front of Salinas Grandes town and beach. The island lies very close to the coast, and is practically nothing more than a thin, long trip of sand. The nature, however, is spectacular.

Between the island and the coast grows a mangrove forest, which houses tons of birds. Furthermore, crocodiles live in the water as well as lots of crabs and other crustaceans. It’s great to take a boat or kayak and cruise through the forest. There are small, curvy waterways you can browse through, with egrets and other birds around every corner.

The town of Las Peñitas also has bars and small shops where tourists can buy basic supplies. 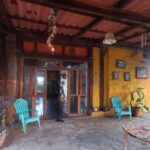